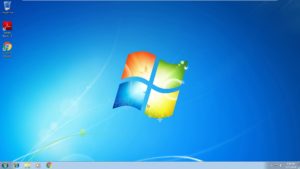 The support for Windows 7 ended on January 14th. This came with mixed reactions from users all around the World. As much as this should mean that Microsoft will now be able to channel more resources towards the maintenance of Windows 8, 10 and of course developing future versions of Windows, which is quite understandable.

However, this has also come with lots of backlash and displeasure from over a hundred million Windows 7 users around the World. One could argue that a good number of these users are deciding to still keep their Windows 7 out of mere preference, and we can see reasons for that.

Especially given that upgrading from Windows 7 or 8.1 to Windows 10 is absolutely free and you will not be losing any files or applications if you follow the steps in this video. So, for these many users to still want to keep their Windows 7 when they could upgrade to Windows 10 for free, it clearly shows that this is not a mere financial decision.

For sure upgrading to Windows 10 is one of the best ways to go if you do not have a solid enough reason to still keep the Windows 7, however, if you still have an absolute need to keep using your Windows 7, then keep reading to learn how to do that safely and effectively.

Another major factor that keeps most Windows 7 users from upgrading to Windows 10 is the issue of compatibility with older proprietary software. Last week I had a client walk up to me and requested for a Windows XP installation on a pretty old ThinkPad.

Yes, you read it right, not Windows 7, not even Windows Vista, we’re talking Windows XP. For a moment I thought he was kidding, but he insisted, I got a bit curious and asked why he needed the Windows XP, he happened to be a car technician, so he explained to me how XP is the best platform to run his auto software.

Of course, it took a while to have it all set for him, but that goes to show that some applications are just designed to work more effectively on the Windows version that was in existence when they were designed compared to future versions. But that is not the only reason why so many users still want to keep using Windows 7. 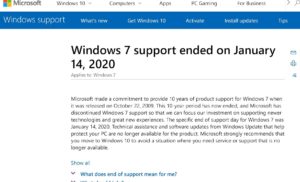 Ok, so first, let’s understand what this end of support actually implies. Simply put, Microsoft will no longer be rolling out security updates for Windows 7. You may as “What does that imply? And why is that even a thing? And what should be done about it?

I will try to explain why this is such a big deal in a moment, but if you want more detailed responses to the most common questions people ask regarding the Windows 7 end of support, you can visit this Microsoft support page and keep expanding each question to see the corresponding answers.

Here is important to note that if you install a fresh copy of  Windows 7 today, you will still be able to download and install the initial cumulative updates, that’s all updates till January 14, so the end of update in question here is for future updates. 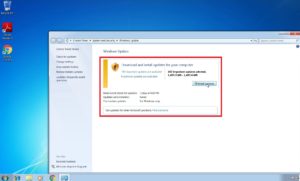 Now to answer the question on why this end of security updates is such a big deal, I will be using the update records on my Windows 10 for reference, the same thing would apply for any version of Windows, be it 7, 8 or 10.

Most of the updates you install on your Windows are often security-related. Back in the early days of personal computing, most security threats like viruses and malware were spread through device sharing like USB sticks or other flash memories. 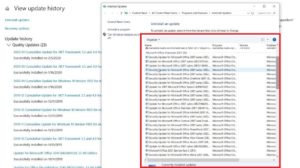 Then not so many computers were connected to the Internet, so one would always need antivirus software to scan these devices each time you connect them to your PC, otherwise, you can have a blue screen with some red notes or some absolute malfunctioning of your computer. These days, that has changed remarkably.

This gets even more complicated because the security solutions that worked yesterday might not necessarily work tomorrow, given that as the good guys are working hard the bad guys are also working hard. So these security updates are one way that Microsoft tries to be a step ahead of the bad guys at all times.

This is why today most average Windows 10 users can practically rely on the default Windows 10 defender for both online and offline security. That’s also why is important to send error reports to Microsoft whenever you encounter any malfunctioning that pops up an error report request.

Of course, these updates could be buggy at times, like we’ve seen with the recent Windows search being blank and loss of files from some past updates. But that’s mostly due to the complexity of what makes up Windows as it is today; hundreds of thousands of scripts, roughly 50 million lines of code. That is certainly a complex thing to manage. But the idea is to keep all that secure, and constantly working with experts to identify new security threats and include a preventive solution in an upcoming update.

A practical example is this description of a cumulative security update published in December 2011:

Security issues have been identified in ActiveX controls that could allow an attacker to compromise a system running Microsoft Internet Explorer and gain control over it. You can help protect your system by installing this update from Microsoft. After you install this item, you may have to restart your computer.

These days, Microsoft publishes full details about each update on their website, you can also find the links to these descriptions from your update history. 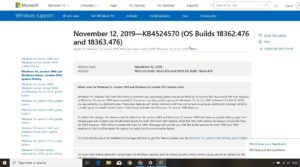 Here, by clicking on any of the updates it will open up full information about it from Microsoft. So let’s take a random example, and here you have the date of release and the supported builds. Here it tells you what’s new and all that. If you scroll down a bit, then you have this highlights section where it gives a short summary of what the update is for. Here it says Updates to improve security when using Internet Explorer and Microsoft Edge. So clearly this is a security update, if you want to know more about the improvement and fixes, you can expand each of the versions. If you take time and go through these details, you will come to understand how security updates work and why they’re important. 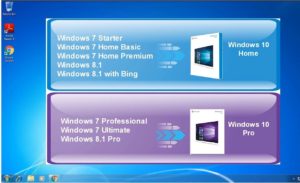 First, I’ll say, if you do not have a strong reason to keep using Windows 7, then it might be best to upgrade to Windows 10. I kind of understand the resistance, I also held on to Windows 7 long after Windows 10 was released, I really never used Windows 8, but upgrading to Windows 10 ended up being a really good decision, so if for some reason you’re still on the fence about it, maybe you can give it a try and see how well it works for you. Moreover, you have 10 days during which you can still revert back to Windows 7 if you need to. It is completely free if you follow the steps I provided in this video. 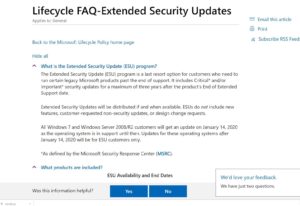 The second alternative would be to opt for the extended support offered by Microsoft. This is quite a costly option in my opinion. First is limited to roughly 3 years from the official end of support date, so anyways you will have to wrap it all up by January 2023. First-year support would cost 50 Dollars per device while the second and third years will cost 100 and 200 dollars respectively. In addition, this support is currently available to Pro and Enterprise editions is still unclear if the Ultimate edition will have this option. 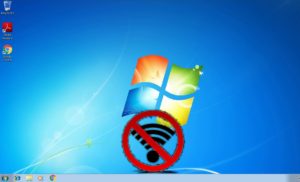 The third alternative would be to go offline with your PC, in other words disconnecting your PC completely from the Internet. As I mentioned earlier, most of the security risks that users are exposed to these days usually come from the Internet, so by disconnecting from the internet completely, you eliminate the chances of ransomware, viruses or some other security threats. So if you have a Windows 7 PC that doesn’t necessarily need to be connected to the internet, then this will be a good option for you. Now in addition to keeping such PC offline, you also have to monitor any external devices you attach to it like phones or USB sticks, because if some malware or viruses manage to get to it through any of such devices, it can equally cause malfunctioning on your offline PC.

The fourth alternative would be to obtain a premium anti-virus or Internet security software that is fully compatible with Windows 7. 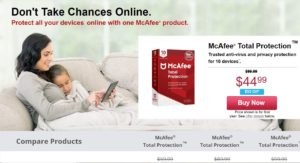 McAfee does a great job with that, both for online and offline security. They have different packages for different use cases and different numbers of devices. It is compatible with both Mac and Windows. They also have mobile versions for iOS and Android. The good thing about this option is that even though you choose to upgrade to Windows 10 anytime, it is still a solution you can take with you. McAfee has been a leading brand in the cybersecurity space for over 30 years. So if you’re going for this alternative, you should definitely check them out, I will leave a link down the video description.

Finally, if you want to try something completely different, you can try out a version of Linux. As you likely know, Linux is a completely free and open-source OS. So you don’t have to worry about any licenses or subscriptions. Currently, there are some distributions that are designed to look quite similar to Windows and Mac. The Zorion OS is the most common example of that. So you can try that out. You just need to check that the applications you need have Linux versions or at least a Linux alternatives you can use for the same purpose.

Hope this was able to help you out. If you have any questions regarding these procedures, please post in the comment section to get more help. The video below demonstrates some of the suggestions discussed above.

How To Fix Common Webcam/Camera Problems on Windows 10
How To Fix External Hard Disk Not Detecting In Windows (No Drive Letter)
How to Play YouTube in Background with Screen Off | No Additional App Needed (Android & IOS)
How to Speed Up Your Windows 10 Performance Once and For All
How to Fix Laptop Keyboard Not Working | Windows 10, 8, 7
Protect Your Online Activities Using RitaVPN
[SOLVED] Windows Failed to Start, a Recent Hardware or Software Change Might Be the Cause
How to Fix MSVCP140.dll Missing in Windows 10, 8, or 7
FacebookTweetPinLinkedIn